“Some tourists think Amsterdam is a city of sin, but in truth it is a city of freedom. And in freedom, most people find sin.”
― John Green, The Fault in Our Stars

Few years ago it wouldn’t come to my mind to think about the question of freedom. Most probably I would link this topic with school history books, philosophic books, or even to news about countries far far away…. Nontheless travelling or living in foreign country might change one’s view about the given topic. 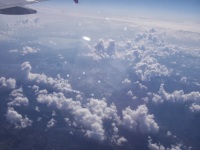 First thing I’ve learned about the freedom in recent years is that freedom has borders. It might sound contradictory but it’s probably very true….at least I see it in that way. Freedom’s borders can be physical or political. When we (Slovenia) entered EU, we faced some obligatory changes. One of them was change of currency which made our living more expensive…other was also change of passport
and entrance in Schengen area. The last one might have been blessing in disguise, since EU passport opened us many doors and also shortened the waiting time on a border. Do you recall that time, when we had to turn our cars (literally) inside out so that customs officer made sure that you, from that Unknown country are not smuggling anything? EU passport also enabled quite easy way of travelling: to enter in most countries in the world, we don’t need to apply for visa and hope not to get rejected, not show our bank account, make reservation of hotel in advance…we can just buy ticket and travel…no one ask where are you going and why are you entering this particular country.

Nontheless, there are other (recent) events in Turkey which might cause this feelings, or at least raise a question if this republic is still res publica or someone else’s affair. Lately, social media in Turkey is satiated with comments about latest prime minister’s idea that (not married) girls and boys, especially students, should not live togheter in a same apartement.

Why? According to him, they are bothering neighbours with that kind of lifestyle. So far, there was no law accepted to prohibit this, however, there has already accepted law about student dormitories: soon many students all over Turkey will have to move to other domitory, because ”mixed” dormitories will be forbidden. Actually mixed dormitories haven’t existed before this law neither: girls and boys lived in separated buldings but chared garden and canteen.

(More about the topic is written here.)

In last year government’s actions are causing many protests all over Turkey(also protests against protests). Probably you remember Gezi park protests. However this protest also have their bright side – a lot of ”art” works and criticism over artistic actions and work. Some of those are also collected in this book:

Welcome! My name is Špela. I love to travel, read and learn. And of course, share all these experiences. View more posts