I have started running only a few years ago. My first run (at the event) was in September 2014. I run 7 km. Approximately 2 months after, in November 2014, I have run my first 10k at the Istanbul Marathon. It was difficult to finish 10k, but at the same time amazing because of two things: firstly, to show myself that I can do it and that summer training paid off, and secondly because at the very beginning runners cross the Bosphorus bridge. That is the only day in the year, that you can cross the bridge connecting the two continents.

It is actually funny that I have started to run in a city that is not very runner-friendly. Ljubljana, when I come from, is basically ideal for it, being flat and having a lot of green areas. However, it seems that running became very popular in Istanbul in the last years, therefore many running groups helped me to continue with my new hobby. (You can get more info about the running crews here, though I have to admit that this post needs an update asap.) But on the second thought: it was very logical. Running is fairly cheap compared to other sports….and you don’t spend time commuting to your favourite gym. (Those who experienced Istanbul or living in a big city know what I am talking about.)

Soon, I have joined my two passions: running and travelling. I started to run around the cities I visited and later I also started to travel to be able to run. I have been to Beirut in 2018 (check breakfast ideas here) and it was a pure coincidence that there was also a women race during my visit. Afterwards I travelled back home to be able to run my very first half marathon. That was in Ljubljana in 2018. After I have travelled to Barcelona and Cairo to continue with my #5karoundtheworld adventure (which in the meanwhile became much more than just 5k).

In February 2020 (just before we realised that COVID-19 will affect us more than we had been willing to admit), I have attended Pyramids Half Marahon. This was only the second event, therefore many improvements are still needed, however overall, the organisation was good. Run started at 8 am, which is a perfect time because it is not too hot, there are no visitors yet in Giza Plateau and one can see a pyramid sunrise.

Venue and how to get there

The venue, that is the Giza Plateau is located about half an hour (with Uber) from downtown Cairo. There was no public transport or marathon bus to take you there. On the positive side: the organisers gave a 50% discount code for Uber and Uber drivers (at least some of them) were informed about the event. The race kit pick up was luckily on a central location, not far from the Tahrir Square.

I was really excited to be able to run by the pyramids and even the famous sphynx! I literally couldn’t wait to see the sphynx (and her nose :). This gave me the energy to run because according to the race map, I should be able to see her majesty around the kilometre 5.

(Spoiler alert.) I didn’t see it…yet. It turned out, that one is not able to see the sphynx from where we run, so I decided to enjoy the pyramides view. (And camels. At some point, tour gides with camels showed up. It turned out that they were waiting for the tourist group to come. The scene was quite comic though. And another plus was seeing a guard with a camel.)

The route itself is quite gradual at the beginning. It goes a bit downwards after 3 km and at about 4 km you have to make a turn and run upwards again. At this point nothing really difficult. But after 12km there comes a long downhill (if we can call it like that), which is a few kilometres long. At the end of this downhill, there is another U-turn, which means that the most difficult part comes when you are already tired (as you have run 15km or more) and you know, that there is long uphill waiting for you. Last few kilometres are on a flat surface, but the best thing is, that you are running towards the pyramids. There were enough water and food stations all along the route. Unfortunately at the finish zone, there were no fruits (left).

After the race: Enjoy the Great Pyramids of Giza

I remember my primary school’s lesson and “library research” about pyramids. I have wanted to visit them ever since. In finally my fish became true! I have run with the view of the stunning pyramids and after it I had enough energy left to walk towards the pyramids and the famous Sphynx. (I actually hoped that the official race t-shirt would have a Sphynx on it, but it didn’t happen.)

If you attend this race, I recommend you go closer to the Great Pyramids of Giza after the race. Only when standing next to them you will actually understand how big they are. There is also an option to visit the tomb of the pharaoh. And to finally see the sphynx. You can take your UBER back to downtown Cairo from Giza city.

The best way to move around Cairo is Uber. However, there is a small inconvenience: foreing sim cards and mobile data doesn’t seem to work, that is why you can buy a local sim card on the arrival. Other option is to call your Uber when you are connected to a WIFI. Metro is another option. You have to buy single tickets and you pay according to the number of stations you take.

One thought on “Running around the World: the Pyramids Half Marathon” 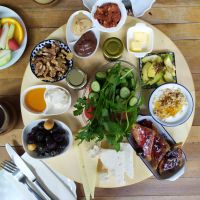